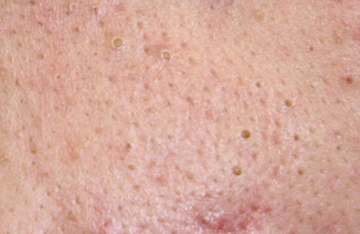 Most people think a blackhead is dirt that gets embedded into your pore and makes this little black plug. You’ve seen them, probably on your own face and maybe on other people as well. That’s what they look like, but guess what? Like many things in life, things are not always what they appear. A blackhead is not dirt and most of them aren’t even black. A blackhead is an acne plug, a collection of dead skin cells mixed with sebum, which has gotten stuck in the opening of the pore. The color comes from the melanin or pigment in the dead skin cells and the oxidation of the sebum at the opening. They actually range in color from a very pale tan to very dark brown, almost black. I spend a lot of my day extracting them from people’s faces and can tell you that only the very top of them has any color. Behind the colored part is a column of sebum that’s white!

Except when I am feeling intellectually lazy, I don’t call them blackheads at all. The technical term is open comedo. “Open” because the pore is open to the air, and “comedo” refers to the plug of dead skin cells and sebum. It is where we get the word “comedogenic”. (Multiples are called “comedones”. Don’t ask me why. It is annoying to me. Kind of like how you are supposed to call one “milia” a “milium”, but that’s another article!) Mostly I don’t even think of them as blackheads. They aren’t black.

Clients frequently ask me if they can use those little sticky strips you can buy in the drug store to get rid of their blackheads. Lay the sticky side against your skin, pull it off, and voila! You’ve pulled out the blackheads! You can even see them sticking up from the little white strip! What could be easier?

Except it doesn’t work. Imagine a can of Crisco™. Sebum is essentially lard, but Crisco™ is close enough. Open up the can and lay the stickiest thing you can think of, say a piece of duct tape, against the shortening. Now pull it up. Did you pull out all the Crisco™? Now look at the tape? Is there Crisco™ stuck to it?

You are doing the same thing when you stick a Biore™ strip on your skin. You will get part of the plug, but leave the rest behind. The part you leave behind can lead to all kinds of issues. So no, you can’t get rid of your blackheads that way.

Given enough time, the body will expel the open comedo, but “enough time” can be months to years, and most of us don’t want them in our faces that long. That is where a skilled esthetician comes into play. He or she can extract those black heads completely from the skin and leave behind a clean empty pore with nothing to turn into a breakout down the road.

So what’s a “whitehead?” Most of my clients imagine a pimple where the end has turned white and they really want to pop it! (See the article “How to Pop a Pimple”) Lots of people call these pustules, “whiteheads.” But in the world of skincare, a whitehead is actually a closed comedo. Unlike a blackhead, where the pore is open to the air, in a whitehead the pore is closed off to the air, so the sebum doesn’t oxidize and the comedo remains white. The plug forms a white bump in the skin. Sometimes the bumps are skin colored, but if you stretch the skin you will see the white underneath.

Sometimes this sort of acne is called “maturation arrest” acne because the pores have not matured into open pores as they should, so the body will never be able to expel these plugs. It is among the most difficult types of acne to get rid of, but at The Acne Treatment Center we are having great success with a combination of treatments, the right home care and some lifestyle modifications.

Whatever type of acne you suffer from, we can help. Give us a call and let’s get started.